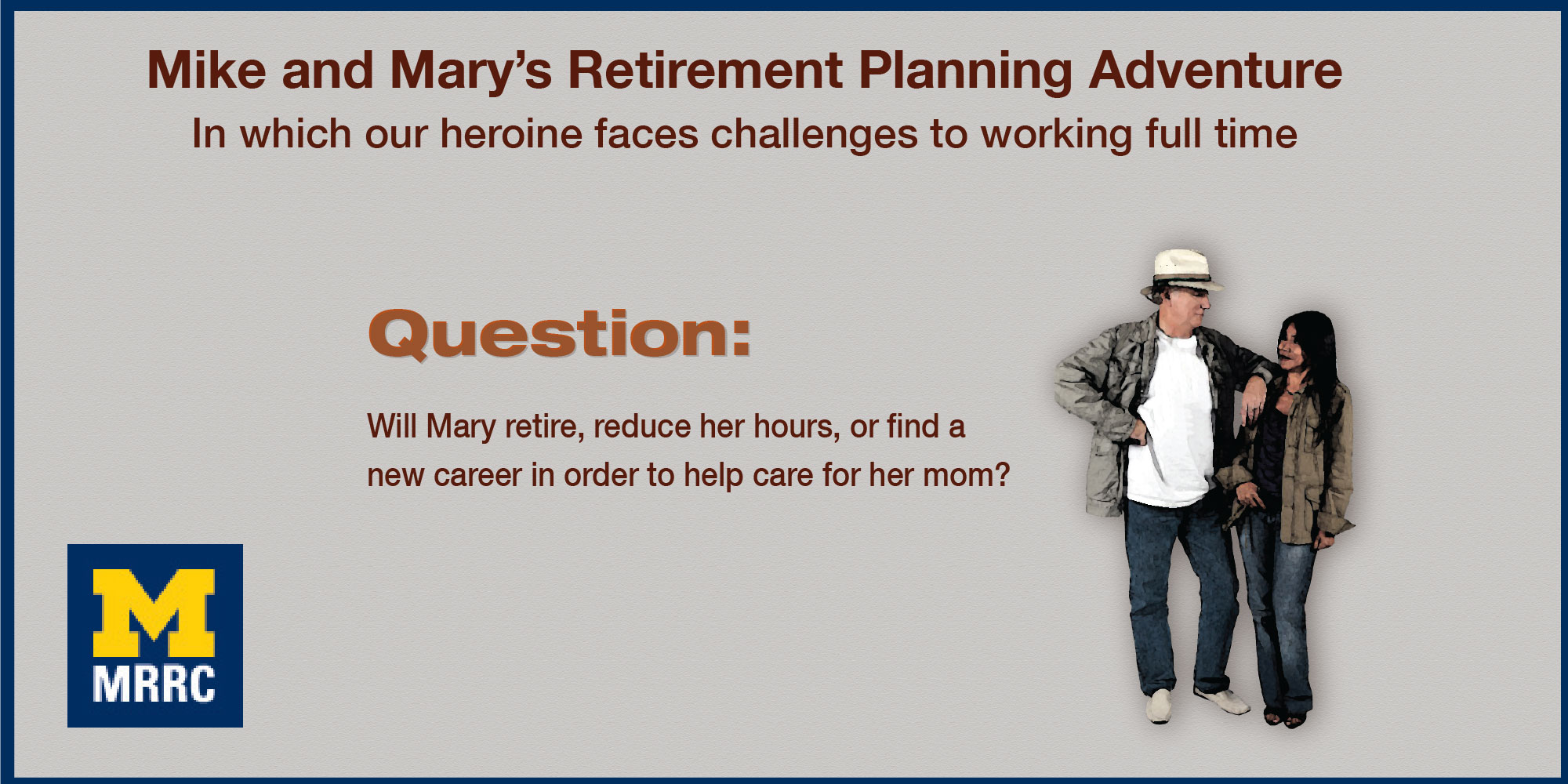 In our last exciting episode, Mike and Mary decided to keep working rather than take early retirement at age 62. They realized that they were behind in their retirement savings goals and likely to live longer than average given their family histories. They’re healthy, active, and like their challenging jobs, so working until their full retirement age (66 and four months) and perhaps a little beyond seemed quite doable.

Sadly, however, Mary’s 90-year-old mom recently fell and broke her hip. After a month in a rehabilitation facility, she is on the way home. Mary and her out-of-town sister have talked their mom into arranging in-home care, but there will be gaps. Now Mary and her family face some choices. Who will be responsible for the breaks in caregiving? Will new duties affect Mary’s work and saving goals? Join Mary and her family as they think through these questions, and learn about some of MRRC’s research in the process.

Mary lives in the same town as her mother and is employed full time. Her sister works part time, but lives six hours away. Distance decrees that Mary will be the daughter most responsible for her mother’s care. Mary has to decide whether to stay in her current job, quit entirely, or find a new, perhaps part-time, position.

True or false: Most caregivers in a recent Health and Retirement Study-based working paper quit their jobs when they began taking care of their parent.

Mary and Mike go on one of their “walk and talks.” Mary points out that she’s had her own health incidents in the past couple of years — a broken elbow and a herniated disc. She worries that these foretell her needing to retire sooner than she’d hoped.

True or false: A series of temporary health events like the ones Mary has experienced are as likely as a permanent health shock, such as a diagnosis of Alzheimer’s disease, to lead to a worker’s retirement.

Mary’s job as a child welfare caseworker for a nonprofit agency keeps her hopping. Up until now, the work has been gratifying, even though it requires some evening work and occasional on-call hours. It is stressful, however. Mike asks her if she wouldn’t like to just retire, but Mary says no — they have savings goals based on her employer’s matching contributions to her 401(k). But she admits that a career change might be in order.

True or false: It’s unusual for 62 year olds to change careers rather than retire.

Mary’s sister offers to stay with their mother every other weekend, and Mike reminds Mary that he can take time off his job to help his mother-in-law when Mary can’t leave work. For now, she decides to keep her current job, but she’s going to start exploring other options, including moving to part time at her current job or going to work for a friend who owns a group of day care centers, which would mean fewer nights and weekends spent working. Mary knows that she doesn’t want to look back after her mom is gone and wish she’d done more.