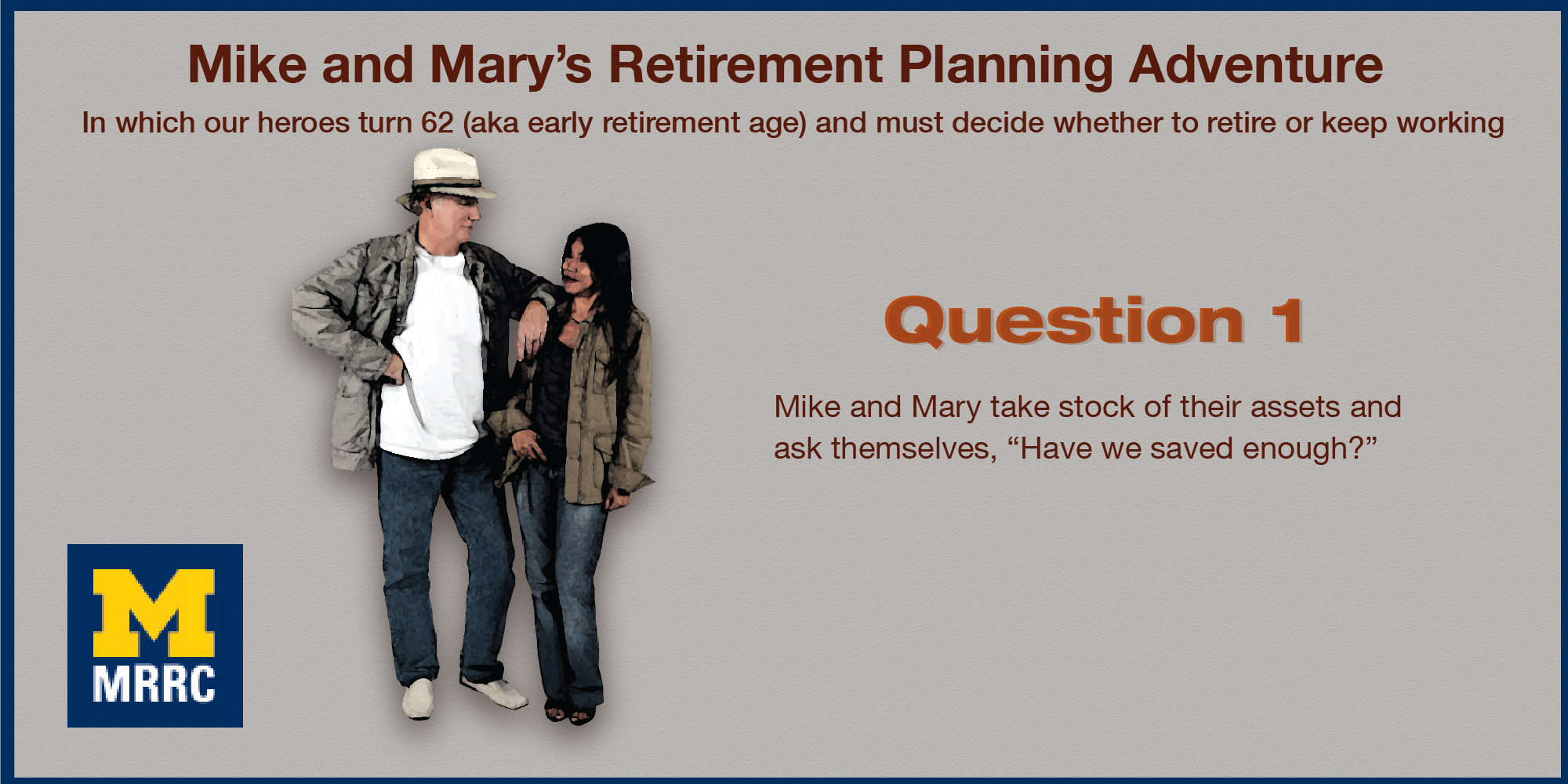 Mary and Mike, known as “M&M” to their friends, turn 62 in 2018 — the earliest age they can retire and claim their Social Security benefits. Mike has worked full-time for 40 years, although he experienced a year of unemployment during the Great Recession. Mary’s work history is more varied: She stayed at home with their son for a few years, then worked part time, and moved to full-time employment when their son went to college. They’re both healthy and like their jobs and co-workers. Now Mike and Mary need to make a retirement decision. Join them as they think through their choices, and find out if you’re up-to-date with MRRC research in the process.

Mike and Mary each have average life-time earnings for their gender compared to their peers. They make a list of their retirement assets. Mike is vested in a defined benefit pension plan from a former employer worth approximately $35,000, and they both have 401(k)s — $80,000 between the two of them — for a total of $115,000 in retirement wealth.

True or false: M&M have more retirement wealth on average than their Health and Retirement Study peers. Link to Answer 1. 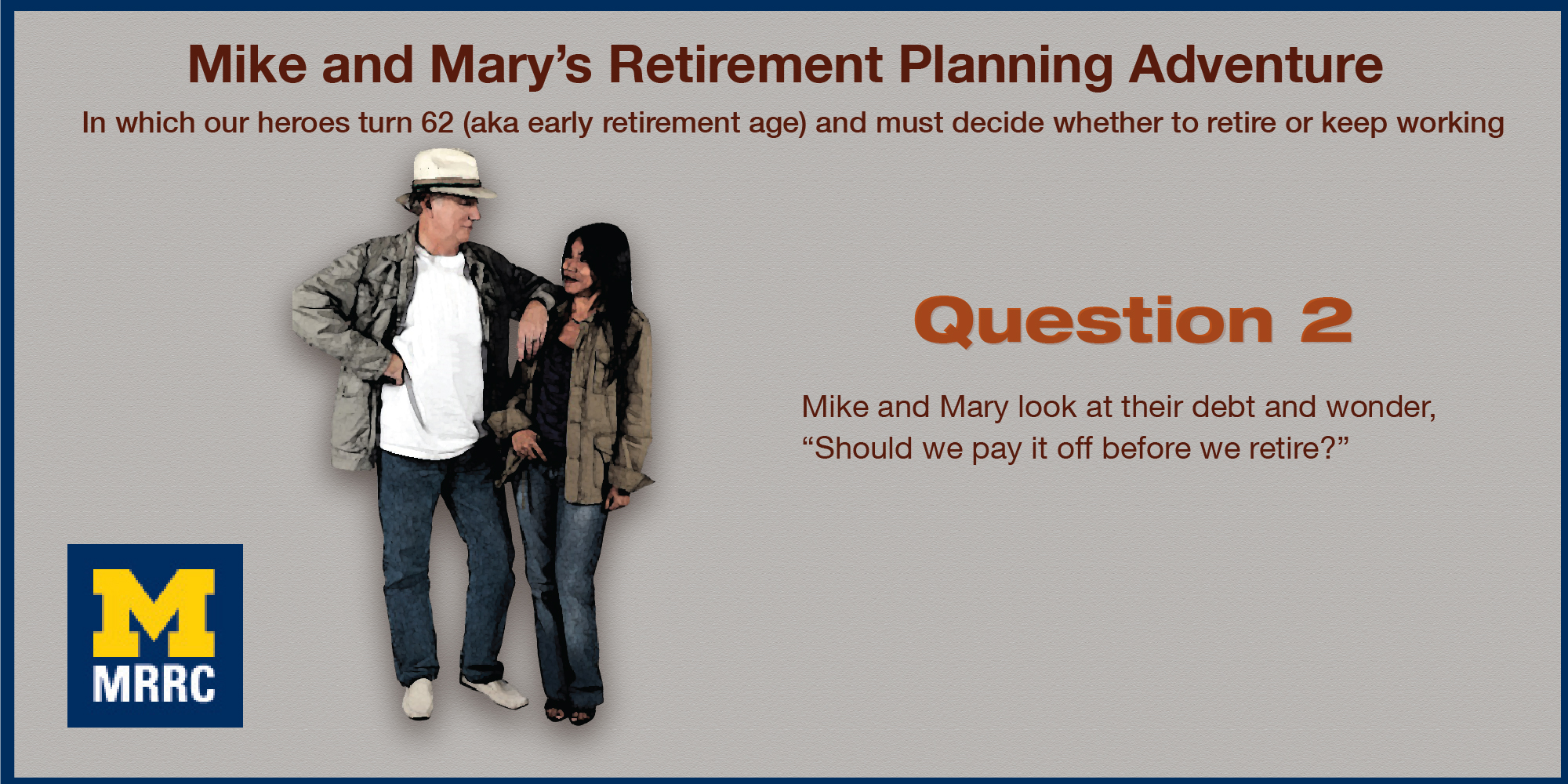 In 2007, Mike and Mary moved into their dream home: a lake house with a cook’s kitchen and the potential for aging in place. They managed to make the mortgage payments while Mike was unemployed, but they’re still five years away from paying off the house.

True or false: It’s common for baby boomers like M&M to carry a mortgage. Link to Answer 2. 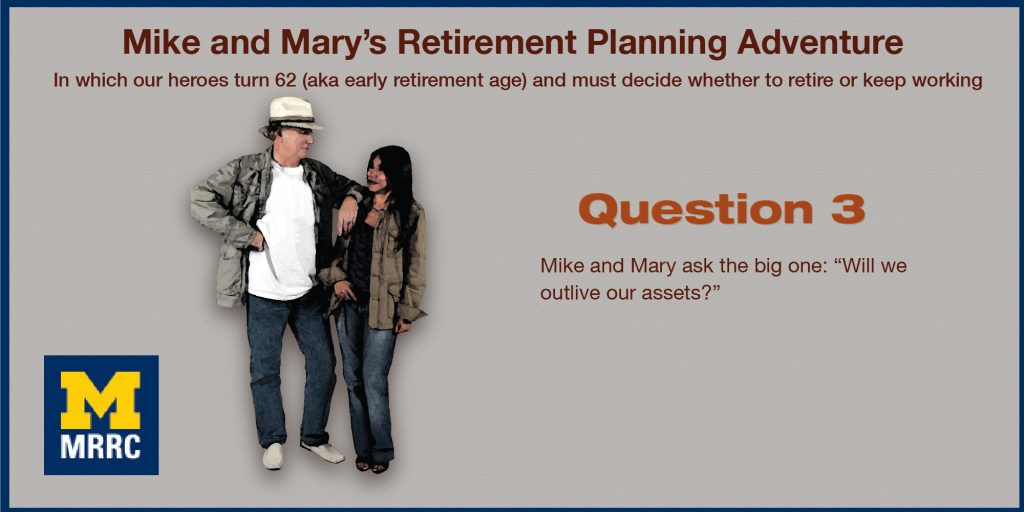 Mary and Mike are currently healthy and active in a U.S. Masters Swimming program. They both have long-lived parents — their mothers are 90 and still living, their fathers died in their mid-80s — so they figure that they’ll have similar lifespans.  That means that M&M probably will have a long retirement period, meaning they’ll need more savings to be comfortable later.

True or false: Health investments, such as physical exercise and good eating habits, can have a significant effect on retirement spending. Link to Answer 3.

After looking at their financial realities, Mary and Mike agree that retiring at age 62 would be financially challenging. They love where they live and don’t want to sell, but holding a mortgage into retirement scares them. They’d like to pay it off before they take the plunge. They’ve also embarked on a catch-up savings plan and, with the help of their employers’ matching programs, hope to make up for the lost IRA. Best to keep working, they decide.

In its final workshop of the year, the MRDRC presented “Disability Research with the Health and Retirement Study…