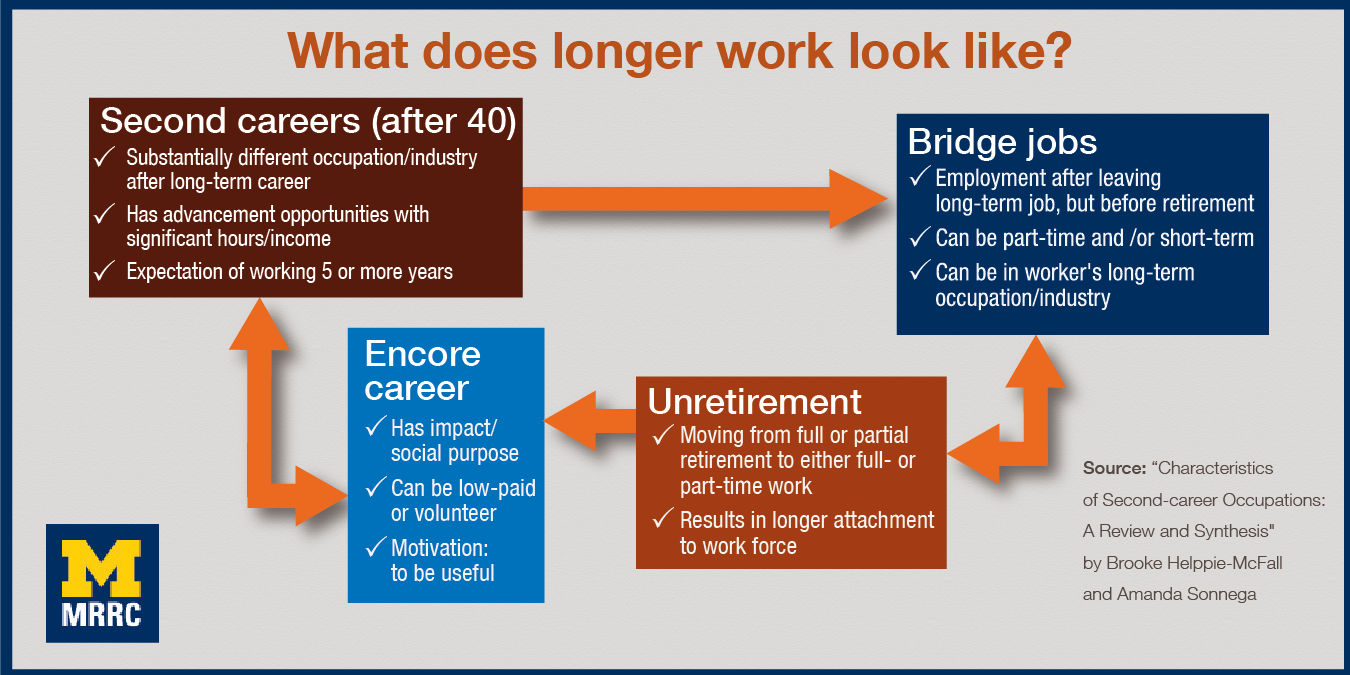 As the U.S. population ages, often in better health than our parents and grandparents, the notion of retirement is starting to evolve, and retirement paths have become as variable as ice cream flavors: One person may partake of the traditional 40-years-at-one-company-and-out flavor while another may start a nonprofit (encore career), and another may retire, hate all that “me” time, and start driving for a ride-sharing company (unretirement).

Brooke Helppie-McFall and Amanda Sonnega’s paper, “Characteristics of Second-career Occupations: A Review and Synthesis,” untangles the differences between career employment, second careers or re-careering, encore careers, bridge employment, and unretirement. The researchers define “second career employment as employment after leaving a long-term career position after the age of 40 in a different occupation and/or industry than a worker’s prior career, with (1) advancement opportunities, (2) significant hours and wage/salary income, and (3) the expectation of working five or more years in the new career.”

Less is known about the specific reasons people choose to work longer. Burn out appears to play a role for older workers who seek new jobs with flexibility, less stress, and meaningfulness according to the authors’ review of the literature. Some may be trying increase financial well-being: Social Security benefits increase with continued work until age 70. For women whose work histories are more likely to include periods of low to no income while caring for family, working longer might allow time for lifetime earnings to recover. There are emotional reasons to keep working as well, including less isolation, a continued sense of connectedness, and higher self-worth.

Helppie-McFall and Sonnega believe that, although common, fewer than half of older workers take on second careers. Right now, survey data on such transitions are scarce. The authors share that the Health and Retirement Study is conducting a survey that will “provide a full accounting of all jobs held by respondents for more than one year from young adulthood through age 50.” Hopefully, this will help capture second careers currently missed. In addition, longitudinal data on individuals’ second careers will shed light on what successful transitions look like, perhaps making it possible to better support and plan for them as individuals and a nation.

How are older workers’ employment prospects affected when there are fewer younger workers?

“This [project] is prompted by a question I’ve been asked by many reporters, which is ‘With larger, older…

« To have and to hold: Researchers investigate how same-sex marriage might affect Social Security spousal benefits
Making sense of health’s role in employment »
Copyright © 2015 Regents of the University of Michigan