Welfare of U.S. vets has declined over time, researchers find 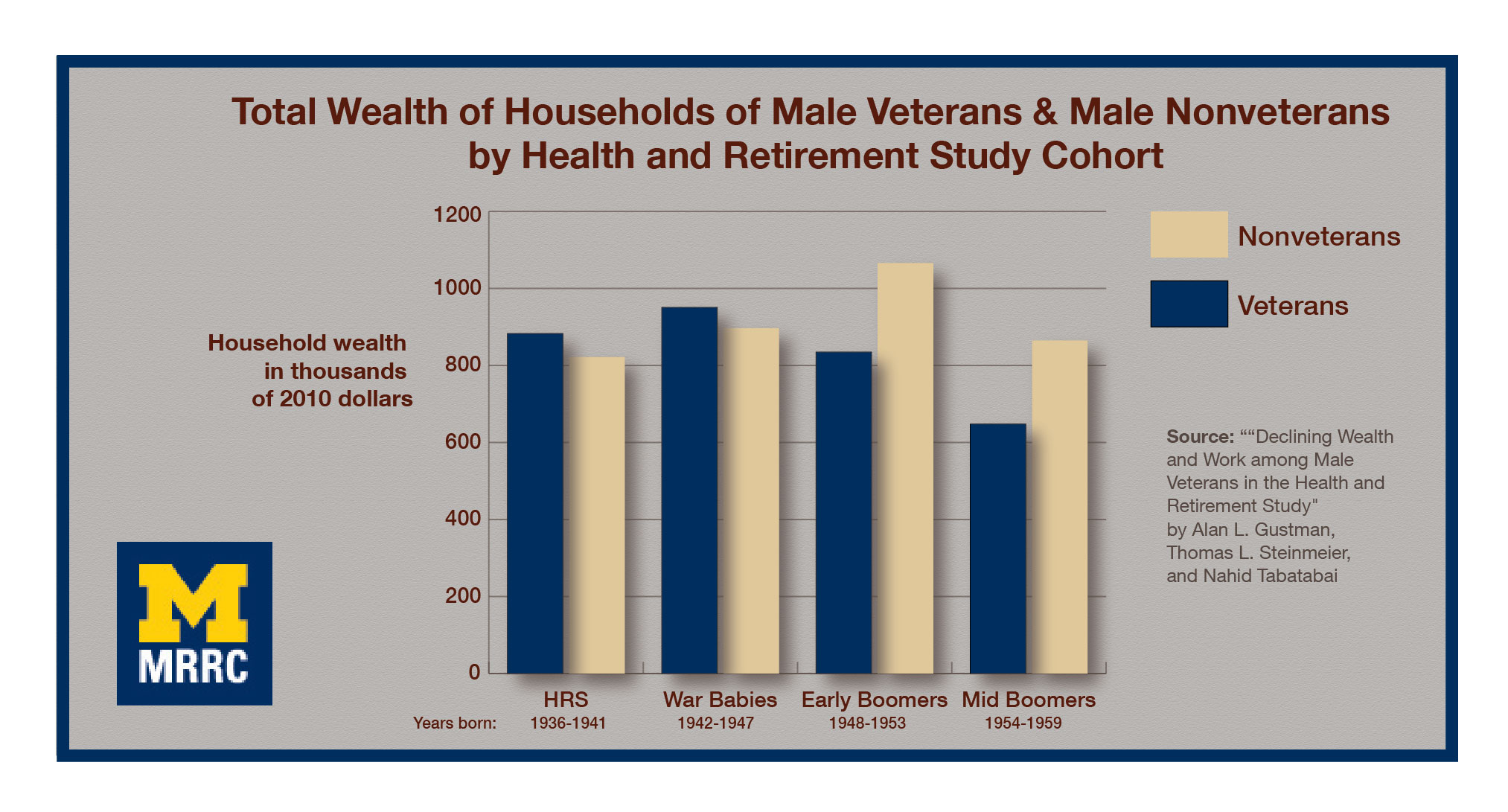 As the face of America’s veterans change, policy, too, will adapt. In this 2015 working paper, “Declining Wealth and Work among Male Veterans in the Health and Retirement Study,” by Alan L. Gustman, Thomas L. Steinmeier, and Nahid Tabatabai
Data: Health and Retirement Study (GST) document the changing demographics of veterans and their preparedness for retirement. They discover something that the authors can only call “a reversal of fortunes” for these veterans:

The authors base their analysis on the Health and Retirement Study (HRS), using survey data from 2002 to 2010. They focus on males born from 1936 to 1959 who were ages 51 to 56 in the first year they were surveyed. (Footnote: Only 1 to 3 percent of veterans in older cohorts were women, which leads to insufficient numbers for analysis.) Their sample includes veterans from the Vietnam War and the Gulf War, veterans who were not deployed in combat, and nonveterans.

In particular, the youngest cohort used in this study, the Mid Boomers, saw the advent of the all-volunteer military. Unfortunately, the armed forces had to endure some growing pains in the first few years of this program. Military pay was not at the competitive levels envisioned at the beginning of the all-volunteer force and administrative error on the Armed Forces Qualifications Test meant that many applicants who should have been rejected for military service were accepted from 1977 to 1980. Those would have been prime years for the Mid Boomers to enter the military. This gives one good reason to suspect the Mid Boomers cohort of veterans is very different from older cohorts who were drafted into the military.  They were also the hardest hit by the Great Recession (compared to earlier cohorts), which reduced retirement wealth for veterans and nonveterans alike.

In order to study preparedness for retirement, the authors take into account all financial assets including housing, liquid assets, social security and pension wealth. The authors take great care in constructing an individual measure for wealth in pensions by calculating pension wealth associated with each job reported in the HRS. Their method is detailed in their book and has resulted in values for pension wealth that are often used by fellow researchers.

One caveat the authors point out is that veteran’s pension is only available to those with 20 years or more of service. According to survey response, only about 6 percent of each cohort has 20 years of uninterrupted active service. For these respondents, military pension will be accurately computed. However, respondents with 20 years of service from two or more noncontiguous active spells, or a combination of active and reserve spells, may also be eligible, but will be treated as not having military pension in this analysis, leading to lower estimates for financial wealth than they actually hold.

Social Security wealth is calculated with the Social Security Administration’s ANYPIA program. ANYPIA uses an individual’s work history and dates from military service and reports an individual’s Primary Insurance Amount (PIA), with adjustments for military service. An online version is available here should the reader choose to undertake this exercise with his/her own employment records.

For the older cohorts, observable differences in education, race, marital status and health explain most of the wealth gap. Even after controlling for the aforementioned aspects, however, Mid Boomer veterans had 10 percent less wealth than nonveterans.  If poor health and less opportunity for marriage is a result of military service, then the economic penalty of military service is even larger.

There are two explanations for this shortfall in wealth for Mid Boomer veterans. It could be a symptom of those with lower earnings potential self-selecting into the military, where the military experience itself does not penalize veterans. However, it could also be due to lack of economic opportunity for the all-volunteer force. If it is the latter, then expanding SS benefits for veterans may narrow some of this wealth gap. The authors hope that data on more recent cohorts of the all-volunteer force who were not subject to some of the earlier mistakes may shed more light on this issue, but are skeptical that the gap will disappear entirely in more recent cohorts.